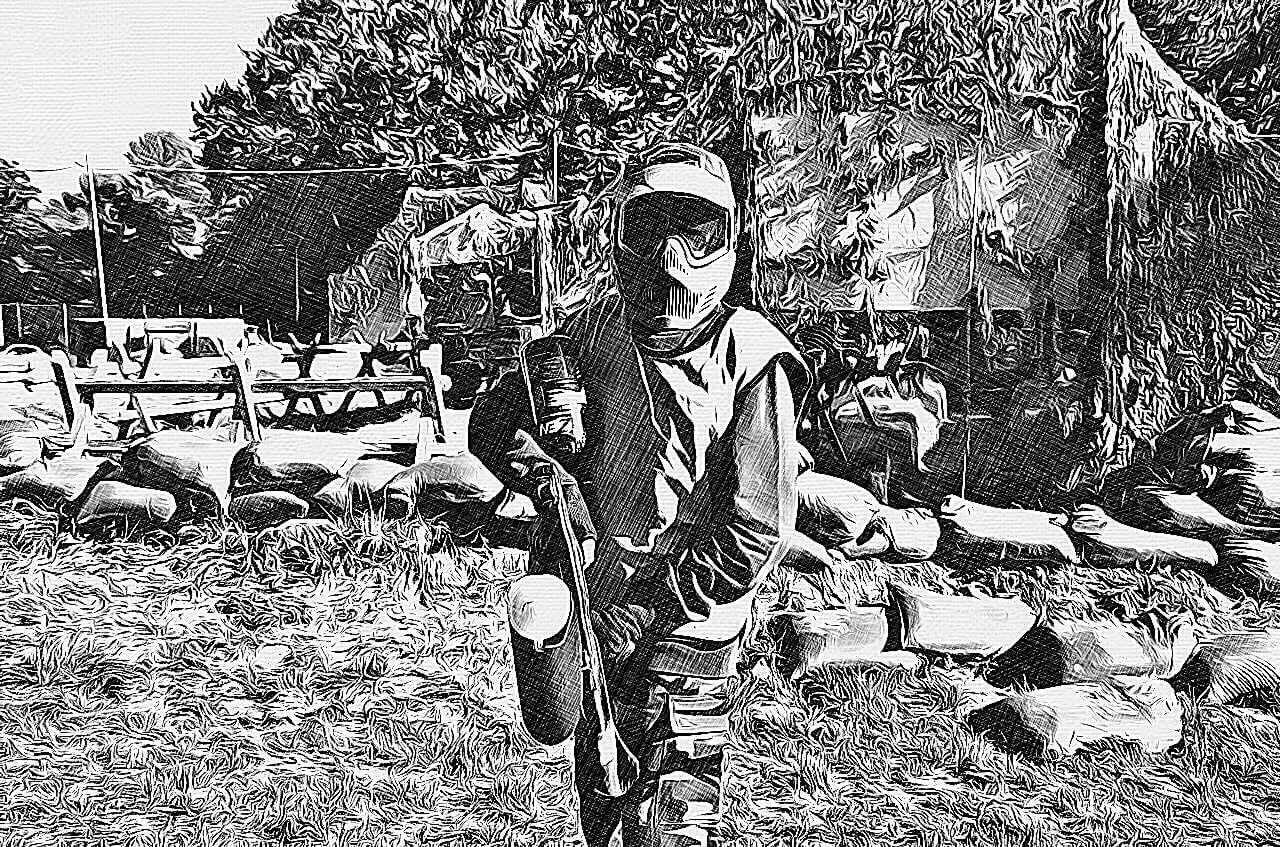 Paintball is the king of combat games and is one of the most popular games in the United States. The shoot-em-up with paintball guns game is also very popular in other countries, including Canada, South Africa, Australia, New Zealand, the United Kingdom and many European countries. This article on paintball history answers the when, where, and who started this international thrill-seeking phenomenon.

When was paintball invented? Paintball as a competitive sport was invented in June 1981 in New Hampshire by Hayes Noel and Charles Gaines. Originally, paintball guns were used to mark trees and cattle at a distance.

Looking to learn more about paintball? Keep reading on to learn about the history of this sport!

The sport of paintball has an interesting history. It begins in the mid-1960’s with a man named Charles Nelson. Nelson owned and co-founded a company called the Nelson Paint Company that made (you guessed it!) paint and paint supplies.

One such item the Nelson Paint Company invented was a paintball – a small ball made of gelatin that holds dye or paint inside.

The gelatin spheres that were made into paintballs were originally made as digestive tools for horses. Specifically, farmers and ranchers who needed to give their horses or cattle medicine could put the medicine inside the gelatin capsules for easier consumption by the beast.

Eventually, Nelson got the idea to put paint inside of the capsule and to then fire that capsule out of a CO2 gun. Thus, the first paintball was invented!

Why did Nelson get this strange idea?

The reason why Nelson created the first paintball was to solve a problem.

Nelson invented paintballs and paired them with CO2 guns to solve this problem! At this time, paintballs guns were known as paintball markers because they were used to mark trees and cattle.

History of Paintball – When Did Paintball Start (The Sport)

The invention of paintball as a sport came from a disagreement between two men – Hayes Noel and Charles Gaines.

In 1977, Hayes Noel, a stock broker, and Charles Gaines, a writer and outdoorsmen, had an argument about how long city-slickers could survive in the woods.

The disagreement lasted for several years until 1981 when the two discovered the Nel-Spot 007 in an agriculture catalogue. The Nel-Spot 007 was a paintball marker produced by the Nelson Paint Company.

In order to resolve their disagreement, they purchased some of the paintball markers and had a duel at 20 paces to test them out! Gaines won this first duel, and they further tested the paintballs by firing them at Shelby Gaines, Gaines’ son, who noted that they didn’t hurt that bad.

At this point, Noel and Gaines teamed up with Bob Gurnsey to create a survival game using the paintball markers.

Set in Henniker, New Hampshire, this new survival game had 12 players- 6 players were avid hunters and the other 6 players came from a variety of professions, such as stock broker, writer, and surgeon.

The game was very similar to capture the flag – each person had to capture one of 12 different colored flags from 4 different stations. The first player to have all four flags became the winner!

The winner of the very first paintball game was Ritchie White, a stealthy forester who never even fired his paintball marker!

After that first game, Bob Gurnsey would go on to promote the sport of paintball as the National Survival Game (or NSG for short).

An article was run in Sports Illustrated which promoted the game across the nation. People were interested!

Noel, Gaines, and Gurnsey saw this as a business opportunity and started creating starter kits including a NelSpot 007, paintballs, goggles, and a rule book.

Eventually, they would open commercial fields and host competitions which would increase the popularity of the sport.

The paintball markers would be refined and eventually start to be called paintball guns.

Others would start their own businesses developing these paintball guns or by licensing land for use in paintball battles and competitions.

Thus, the sport of paintball was born!