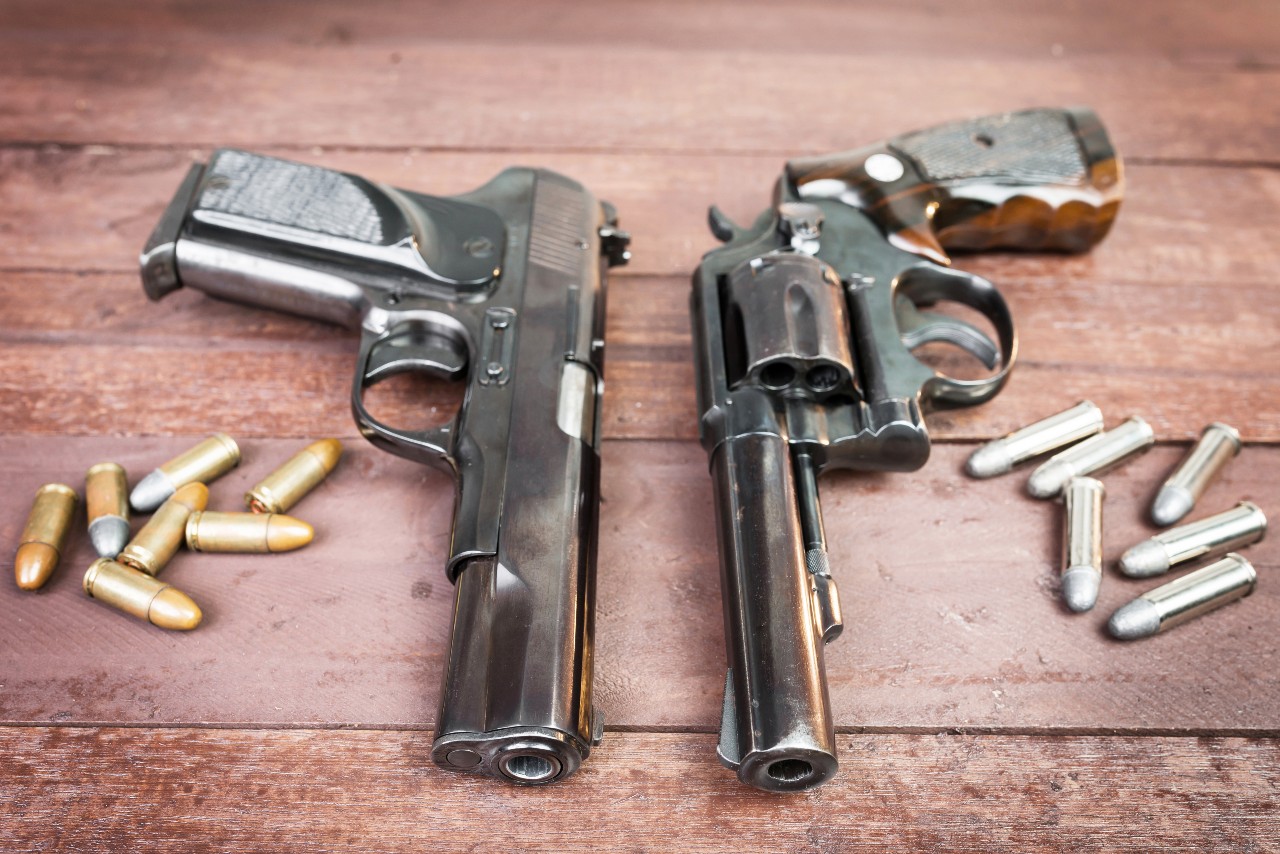 Quite often, we hear the term “pistol” being used pretty loosely. Usually it’s used in reference to a handgun, which is technically incorrect. Which brings us to the ultimate pistol vs revolver question: are a pistol and a revolver the same thing?

Technically, no. While both pistols and revolvers are considered handguns, a revolver fires via a rotating chamber. Officially, the ATF defines a pistol as “any handgun that does not contain its ammunition in a revolving cylinder”.

Keep reading, because we break down key pistol vs revolver differences. We also talk about which is the best handgun for different categories, like home defense, accuracy, reliability, and concealed carry. Let’s shoot!

Pistol vs Revolver: The Basics

Let’s look at the basic differences between a pistol and a revolver. A pistol is defined as a small weapon, usually able to fit into one hand, that fires projectiles. Many people incorrectly use the terms “pistol” and “handgun” interchangeably. As the name suggests, a handgun refers to any gun able to be held in your hand, be it a pistol or revolver. The chamber is stationary and fitted to the gun. A revolver has (you guessed it) a revolving chamber. For simplicity’s sake and the purposes of comparison, we will assume that a pistol refers to a semi-automatic weapon and vice versa.

Revolver vs Pistol for Home Defense

Maybe you’re looking for a home defense weapon and you’re not quite sure which to choose. Which is the better option – pistol or revolver? Both have their advantages and disadvantages. A pistol is a handgun that has one or more stationary chambers. A revolver has multiple rotating chambers.

For home defense, you definitely want a reliable weapon. While some single shot pistols do exist, most modern day pistols are semi-automatic weapons. The advantage to having a semi-automatic weapon on hand for home defense is that they normally hold between 6 and 18 rounds, depending on the make and model. While it is not a common issue, there is also a higher possibility of malfunction and jamming. An advantage to a revolver is that it is less likely to jam, which is obviously a huge plus when faced with an intruder. That being said, revolvers also hold fewer rounds (usually 6), which would be a disadvantage should you have to take on multiple assailants. However, a revolver is also simple to use, making it a great choice for any homeowner.

When choosing a weapon, accuracy and reliability is obviously a priority. Whether you’re shooting for fun or in a high stress situation such as using your weapon for home defense, you want to be sure you can hit your target. So which is more accurate and reliable – a pistol or a revolver?

As far as accuracy is concerned, semi-automatic pistols and revolvers are on pretty even ground. Some may argue that a revolver may be more accurate because its barrel doesn’t move. However, this is technically not the case. Though the barrel of a semi-automatic weapon technically moves, the projectile immediately engages with the rifling as it leaves the weapon, which aids in accuracy. In the case of a revolver, the projectile has a further trip from the chamber to the barrel, which some may argue decreases the accuracy. In actuality, the accuracy really depends on the skill of the shooter.

As we previously discussed, revolvers are less likely to malfunction than modern day pistols or handguns. Don’t misunderstand, it can happen, but it is a rare occurrence. Modern pistols or handguns will experience a misfire or hangfire on occasion. This means instead of expelling the bullet from the weapon, the bullet remains in the chamber and jams the weapon. Misfires and hangfires are a bit different. One of the most common reasons a  misfire happens is when the primer is not hit by the firing pin with sufficient force. Thus, the trigger is pulled, but the weapon does not fire. This can also be caused by faulty ammunition. Caution should be used when clearing the weapon because there’s not a way to distinguish between a misfire and a hangfire.

Alternatively, a hangfire happens when the trigger is pulled and either the hammer or firing pin fall, but there is a delay between the pull of the trigger and the actual shot being fired. Hangfires are typically more dangerous in nature because there is no way to know when the shot will fire. The user should use extreme caution when clearing the weapon of a hangfire.

These problems are less common with a revolver as the revolver has multiple rotating chambers. Therefore, it is less likely for a round to become lodged in the gun. There are a few malfunction concerns when it comes to a revolver. There is a possibility of non-fired bullets  coming out of their casing and causing the gun to malfunction. This is usually caused by incorrectly manufactured ammunition. You may also run into issues with damage to the ejector rod and you also may have issues if you’re using a moon clip, which can have a tendency to get bent out of alignment. Regular maintenance and lubrication will prevent most issues with revolvers.

Is a Pistol or Revolver Better for Concealed Carry?

.A common debate amongst gun owners is what type of firearm is best for concealed carry. It really comes down to personal choice. Size and weight are important to take into account. Typically, pistols tend to be a bit larger and heavier than a revolver. The most popular concealed carry revolver, particularly for women, is the 38 special, which is only slightly smaller and lighter than the average semi automatic handgun. Not really much to make a difference, but once again, personal preference.

You also want to consider ease of use. If you are a new shooter, a revolver may seem less intimidating. Revolvers are simple to use – load each of the chambers, pop it into the gun. Maybe a trip to the range to check out how it handles and you’re ready to shoot. Most are equipped with an internal safety that will not allow the gun to shoot unless the trigger is pulled.  When you’re dealing with a semi-automatic weapon, there’s a lot more to the mechanics and maintenance and care. Coupled with the fact that not all semi-automatic pistols operate the same, it could take you a little while to find one that you are comfortable and confident with. Some semi-automatic pistols have a manual safety feature, others do not. Some have a hammer, some do not. The bottom line is both a semi-automatic handgun and a revolver are effective for concealed carry purposes. The most important thing is to find the design and function that works best for you.